Tim Cook: “A backdoor on your smartphone would be the cancer of the software”

In an interview yesterday at the ABC, Apple CEO Tim Cook is back on the topic of the FBI and the struggle that his company is conducting against the government to protect the safety of the data of all users. 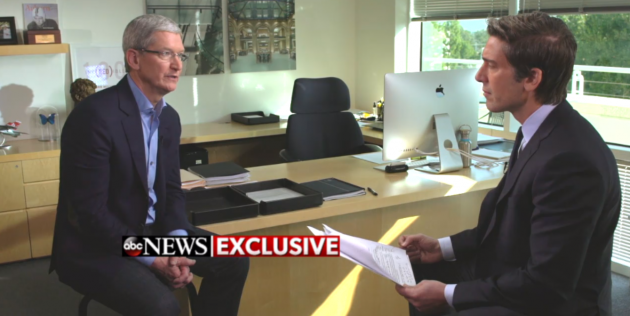 Last week, a California court has asked Apple to unlock the iPhone 5c one of the terrorists of the massacre of San Bernardino, but the company has responded that from iOS 8 onwards, you cannot do this. The government and the FBI then asked to install a backdoor on iOS, but for Apple this would allow any cyber criminal to access this “universal key” and control the sensitive data stored on any of the iPhone scattered all over the world. Among other things, Apple would have been able to provide the updated backup of this iPhone, if only the FBI had not asked the employer of the defendant to change the password of the Apple ID (the iPhone 5c is, in fact, was of the company, and was provided in the use of the employee).

During the interview, Cook is to know that in fact there was never any formal request from the government, but only by the well-known judge in California: “We heard the comments of the government by the press, but we haven't officially been told anything specific. I believe that something so important can't be handled in this way.”

The journalist did note that Apple is protecting the privacy of the users, with the risk of making it appear more important than national security, because here we are talking about a real terrorist attack. Cooke responded that activate a backdoor on a device would be “bad for the United States, because it would create a precedent that would compromise the sensitive data of the users“. And again, “... I believe that the safety of the people is incredibly important. The safety of the children, of our families. And’ fundamental. The protection of the personal data of the people is very important, but we know that by creating this backdoor expose people to vulnerability are incredible. This is something that we would like to create, it would be bad for America and would put at risk the data of millions of people. If we think of those that are the unknowns of an order of this type, I then believe that we are doing the right thing.

According to Cook, a backdoor is installed on the iOS, it would be “the equivalent software for cancer“. Here are his words: “The only way we know how to meet the requirements of the government is to write a piece of software that we consider to be the equivalent of a cancer. We think that is something wrong to accomplish. We never write it, and we never wrote”.

Cook also stresses that if the county official, on the request of the FBI, had never reimpsotato the password of the Apple ID of the killer, and now Apple would be able to provide much more information to investigators: “The government would have had to ask for help before I commit this error. It was made a misstep is crucial.”

In these hours, we also discover that Apple have even started to develop safety measures, still stronger to protect iOS devices. These new measures would prevent anyone to use any techniques of any kind to access and bypass the security of an iPhone or iPad via brute-force” to find the codes you access.

Last curiosity: the office of the prosecutor of the county of Maricopa, Arizona has announced that it will no longer be provided iphones to employees, as has happened until today: “The refusal to cooperate with the FBI puts Apple in the same way as the terrorists. This is a publicity stunt that ignores the amendments of our constitution, and hide behind the excuse of privacy. For this reason, until the Apple's position will not change, not buying more iphones for our employees.“

Link to the original article: Tim Cook: “A backdoor on your smartphone would be the cancer of the software”

Your blog talks about Tim Cook: “A Backdoor On Your Smartphone Would Be The Cancer Of The Software”? Contact Us to be indexed in the BitFeed Network